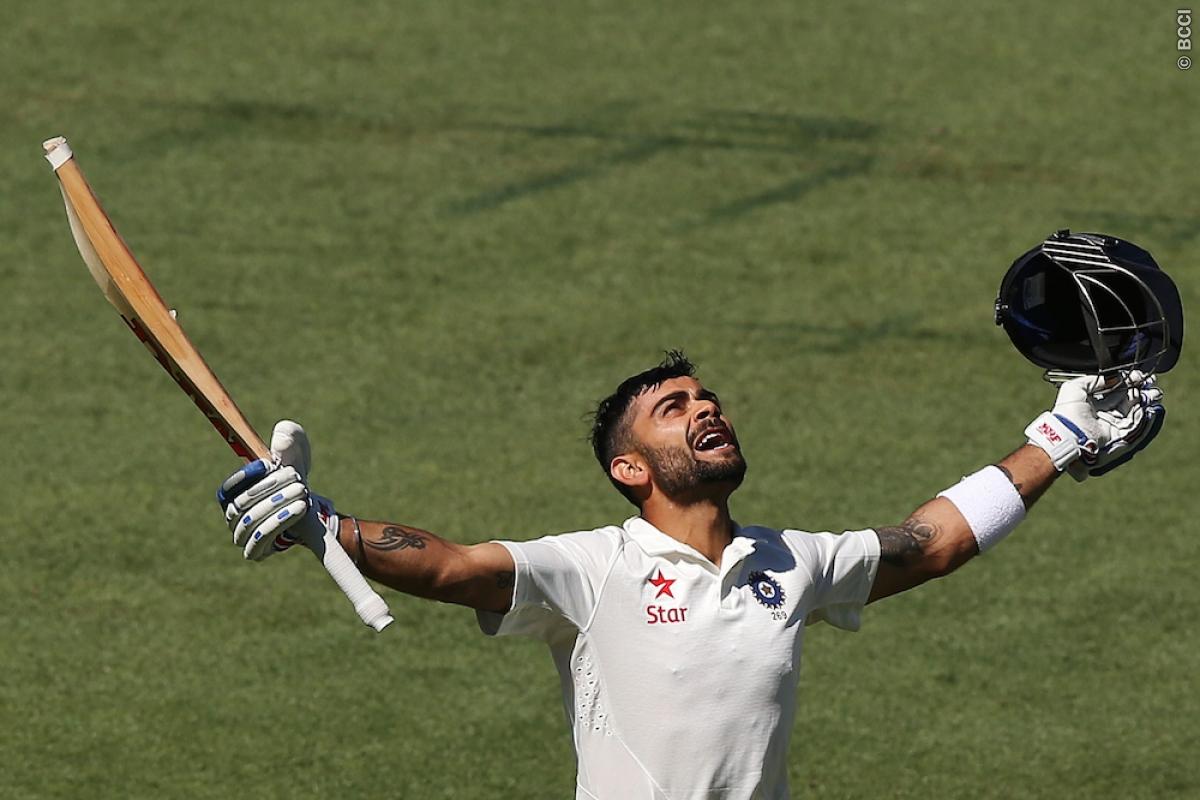 He wasn’t able to connect the ball with the middle of his bat, during the England Test series, earlier this year. But during the ongoing Test challenge, against the Australians, India’s dependable Virat Kohli has got his mojo back. That’s good news for Indian cricket and its fans. Kohli’s back to-back centuries against the Aussies in the first Test, in Adelaide, played last week, has reminded his critics that he is here to stay. What happened in England was but a rough patch.

Judging by Kohli’s knocks in Adelaide, the guy has a voracious appetite for runs. That’s bad news for his Aussie hosts – Kohli can do their side some serious damage in the course of the next three Test matches. Surprisingly, what he was doing in England is not different from what he did in the Adelaide Test match. There was practically no change in his approach, attitude and technique. He remains the same. Even his childhood coach has remarked, in the media, that he didn’t have to make any technical changes in his batting to come back to form. The England debacle was merely a bad run with the bat.

DrCricket7 had a chat with some experts of the game, who believe Kohli could still have problems executing strokes against on-the-rise deliveries in the area of the imagined fourth and fifth stump, which is considered slightly outside the off-stump. But then, he was absolutely fluent in Adelaide. Therefore, the problem lies with the nature of the wicket. In England, the ball comes on a little slower than on the pitches in Australia and South Africa. It also has more lateral movement there, than in any other country.

So, if you are always looking to push your bat against rising deliveries outside the off-stump, you need to bend your front knee in order to get close to the line of the ball before executing your shot. This is completely a case of cricket theory applied. Come to think of it, of late few have come close to emulating the technique of greats like Sachin Tendulkar or Rahul Dravid. These iconic batting legends did a superb job of fine-tuning their batting to prevalent conditions.

With the rise of the stroke-play cricket culture, modern day batsmen put their focus on hitting the ball away from the body. But Kohli has already adopted some of the traits for which both Tendulkar and Dravid were respected for, which happens to be the practice of adjusting the pace and bounce of different tracks. Most importantly, Virat has the temperament to actually outdo some of these greats! As the story goes it was none less than Dravid himself who predicted Virat, then a newbie, would go a long way in international cricket. Since then, this Delhi batsman has lived up to Dravid’s prophecy. Here’s some trivia: Kohli was taken into the Indian ODI team once, during the 2009 Champions Trophy in South Africa, in Dravid’s place. Kohli had blasted so many runs in preceding matches that the selectors weren’t able to justify replacing Kohli with ‘The Wall’.

After his Australian blitzkrieg, if Kohli has any mind-space for what went wrong in England, he should find great consolation in the fact that his former Delhi teammates – Virender Sehwag and Gautam Gambhir – weren’t the most successful in English conditions, either. Both struggled against quality swing bowling. At least Kohli now knows where he went wrong for him in England on his very first tour to this region.

The theory of the law of averages has caught up with the Indian vice-captain. Before the England series, he was a one-man army who was scoring heavily at the top of the order. Then came the England leveller. And now he’s back on top of his game in Australia. Things look good for Indian cricket if Kohli plays like dynamite in the run up to the World Cup. This augurs well for our team. Given his current form, it’s only Kohli who can dismiss himself and not any bowler from the opposition. Here’s a batsman with a likeness to young Tendulkar, and a resemblance with none less than Viv Richards in Test cricket terms.