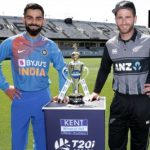 India’s tour of New Zealand begins with a 5 match T20I series on 24th January, in Auckland. This is their first match-up after India’s heartbreaking loss in the World Cup 2019, semifinal. This series is important in context with the upcoming T20 World Cup in Australia, as India aims to win a world title that has eluded them for some time now. In this series, India would look to fix some chinks in its armor and settle its final combination.

Batting first has been India’s Achilles heel, as they tend to be extra conservative at the start. This was an issue they looked to rectify in the previous T20 series against Sri Lanka and West Indies. There also seems to be an over-reliance on Virat Kohli and Rohit Sharma, especially while chasing and the rest of the batsmen need to take more responsibility, for the team to feel more assured in a crisis situation. The spot for the wicketkeeper-batsman is still open, as various candidates have been tried out and have struggled to make this position their own.

The bowling attack looks to be more sorted. The pace bowling coffer is full; led by the astute Jasprit Bumrah and ably supported by the ever consistent Mohd Shami, and the new additions like Navdeep Saini and Shardul Thakur. India also has a lot of variety in their spin bowling options, with the frontrunners being Ravindra Jadeja, the allrounder and the spin twins- Kuldeep Yadav & Yuzvendra Chahal.

This series will be a keenly contested affair and will be a true test of India’s adaptability and prowess, especially in foreign conditions.