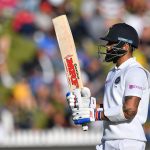 India’s woes in Test cricket, away from home continued as they lost the 1st test match against New Zealand by 10 wickets, bringing an end to their 7-match winning streak in Test cricket.

After being put in to bat first on Day 1, Indian batting floundered in the swinging and seaming conditions as they were only able to muster 165 runs. In reply, New Zealand scored 348 and took a lead of 183 runs, with over 120 runs being added by the last 3 wickets. Ishant Sharma was the pick of Indian bowlers as he completed another 5 wicket haul, however, he was let down by the lack of support from the other bowlers.

India then had the chance of rectifying their mistakes in the 2nd innings, however, failures of Virat Kohli and Cheteshwar Pujara compounded their problems and put them on the backfoot. Eventually overhauling New Zealand’s lead and setting them a decent total proved to be a bridge too far as India could only manage to put 191 on the board, aided by a half-century by Mayank Agarwal. New Zealand scored the 9 runs required for victory and took a lead of 1-0 in the 2 match series.

The caravan now moves onto Christchurch as India faces New Zealand on 29th Feb. India has got an extra day to figure out how to combat the swinging and seaming conditions and salvage the series and their reputation.