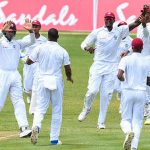 TEST CRICKET IS BACK!

The test match between West Indies and England heralded the return of live cricket after a gap of 4 months. Before the tour began, it was embroiled in various controversies- health and safety concerns during COVID 19, discussions around #AllBlackLivesMatter and yet again cricket turned out to be the greatest unifying force in these times of distress.

The cricket match in itself was riveting and was a great advertisement for Test Cricket. A resurgent West Indies Team is always a good sign for international cricket as it defeated England on its’ turf.

Batting first; under cloudy circumstances and in the absence of their best batsman Joe Root, England struggled to put up a formidable score and conceded a 100 runs lead to West Indies in the 1st innings. England put on a much- improved show in the 2nd innings, though their innings was derailed by a spectacular collapse. In reply, chasing 200 for a win, West Indies were reduced to 27/3 but eventually stuttered their way to a historic 4 wicket win on the back of Jermaine Blackwood’s 95 runs.

The match was special in more ways than one as it allayed concerns of playing live cricket without crowds and also raised questions on the aspect of racism and how deeply ingrained it is in our society. The stance of ‘taking the knee’ by both the teams and the poignant words of Michael Holding, former West Indian fast bowler will be etched in everyone’ memories forever and will hopefully revolutionize the game and the system.