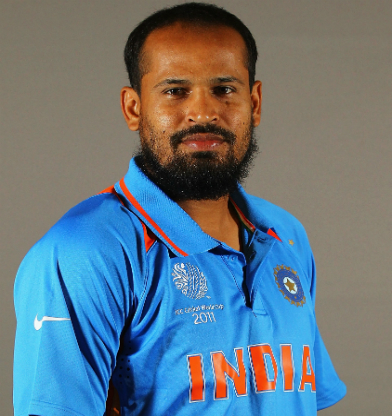 The Indian cricket team player Yusuf Pathan has been suspended for a doping violation. Pathan, who is Irfan Pathan’s brother, had inadvertently ingested a prohibited substance, which can be commonly found in cough syrups.

Pathan had provided a urine sample as part of the BCCI’s anti-doping testing program during a domestic T-20 competition on 16th March 2017 in New Delhi. His sample was subsequently tested and found to contain Terbutaline. Terbutaline, a specified substance, is prohibited both In & Out of Competition in the WADA Prohibited List of Substances.

On 27th October 2017, Pathan was charged with the commission of an Anti-Doping Rule Violation (ADRV) under the BCCI Anti-Doping Rules (ADR) Article 2.1 and provisionally suspended pending determination of the charge. Pathan responded to the charge by admitting the ADRV and asserting that it was caused by his ingestion of a medication containing Terbutaline that had been mistakenly given to him instead of the medication prescribed for him, which did not contain any prohibited substance.

The BCCI is satisfied with Pathan’s explanation that he had taken Terbutaline inadvertently to treat an Upper Respiratory Tract Infection (URTI) and not as a performance-enhancing drug. Having considered all of the evidence and taken expert external advice, the BCCI has accepted Pathan’s explanation of the cause of his ADRV, and on that basis has agreed that a period of ineligibility of five months should apply, together with the disqualification of certain results.

Under BCCI ADR Article 10.10.3, Pathan is entitled to the full credit against that period of ineligibility for the provisional suspension that he has been serving since 28 October 2017.

In addition, there is discretion under BCCI ADR Article 10.10.2 to back-date the start date of the period of ineligibility still further on account of Pathan’s prompt admission of his ADRV upon being confronted with it by the BCCI, and under BCCI ADR Article 10.10.1 on account of the delays in the results management in this case that are not attributable to Pathan. In all of the circumstances, the five-month period of ineligibility will be deemed to have started to run on 15 August 2017 and end at midnight on 14 January 2018.

The BCCI has a zero-tolerance approach towards doping in Cricket. All Cricketers are personally responsible for ensuring that anything they eat, drink or put in their body does not give rise to an ADRV under the BCCI Anti-Doping Code. The BCCI provides a dedicated 24X7 Anti-Doping Helpline where the Cricketers and Cricket support personnel can contact for any drug queries.

0 0 0 0
Previous : Mike Hussey appointed as batting coach for CSK
Next : Lynn Out Of Australia’s ODI Team Due To Calf Injury