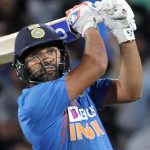 India snatched victory from the jaws of defeat against New Zealand in the 3rd T20 International between the two sides. After the match was tied in the final over, India won the super over, taking an unassailable lead of 3-0 and thereby winning the series.

India batted first and scored 179 in their allotted 20 overs, on the back of Rohit Sharma’s 65(40) and useful contributions from Virat Kohli and the lower middle order. In reply, New Zealand came out all guns blazing; led by their captain Kane Williamson’s superlative knock of 95(48). New Zealand seemed to have the match under control, however, Mohd Shami came back brilliantly in the last over by giving away only 2 runs in the last 5 balls, after conceding a six off the very first delivery.

New Zealand’s tryst with super overs and heartbreaking defeats continued. Jasprit Bumrah, who was handed the responsibility of the super over, had a rare off day and was pounded for 17 runs by Kane Williamson and Martin Guptill. India achieved the target courtesy 2 last ball sixes by Rohit Sharma.

India will now put their feet up and use the next 2 matches to test their bench strength as they move closer to locking their final combination for the T20 World Cup in Australia, later this year.