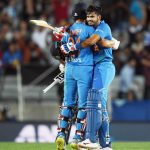 India started the 5 match T20I series against New Zealand on a strong note and is 2-0 up. India’s manner of victory in both the matches, was the most pleasing aspect as it showed India’s adaptability and flexibility. While the 1st match was a run feast, the 2nd match showed the prowess and control of their bowling unit.

In the 1st match, New Zealand set India a mammoth total of 203, to win, after half-centuries by Ross Taylor, Colin Munro & Kane Williamson. India chased the target in the 19th over, and won by 6 wickets; the major contributors being Shreyas Iyer & KL Rahul.

In the 2nd match, India bowled with great precision and accuracy, restricting New Zealand’s score to 132. Ravindra Jadeja was the chief architect of India’s bowling performance, with contributions from Jasprit Bumrah and Mohammed Shami. India won with 7 wickets to spare, with the duo of KL Rahul & Shreyas Iyer combining again to attain victory, after rare failures of Virat Kohli & Rohit Sharma.

The 3rd match starts today in Hamilton, and India will look to keep the momentum going, better their performance and win the series.