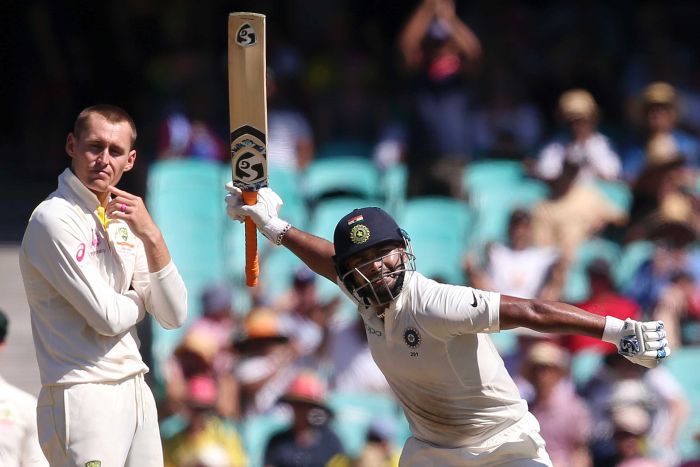 If I named my kid Cheteshwar Jadeja and made him bat with his babysitter, together they'd have scored over 400 runs in this Test match so far. #AUSvIND

Where there is hope…

Only 75 overs until the fourth new ball. #AUSvIND

That will lead to exaggerated claims of their batteries’ longevity.

Quite amazed that Duracell haven’t approached Pujara yet for a tie up.

Pujara ropes in some well-earned praise.

Very happy for Pujara. Here is a player who knows his game inside out, is comfortable with who he is and how he plays and is just a simple, modest man. And that quality is a big part of his cricket.

Rishabh Pant’s assault was the decisive blow to bat Australia out of the game.

Jasprit Bumrah yet to play his part.

They could have batted through the fifth new ball.

They are without their best all-rounder Mitch Marsh, to be fair.

Imagine Trent Boult standing on one leg defending the first ball of the summer.

Massive Go Well to Jack, Mark and Liam for the first Tailenders banner of 2019 at the Sydney Cricket Ground 🏏❤️ #tailendersoftheworlduniteandtakeover pic.twitter.com/yzHzwCvlle

Big risk but you have to take it when the margins are so fine as 7/622.

For the love of all that's holy, can Australia just TRY Cummins with the new ball one time. Just to satisfy my curiosity. I mean, he bats okay against it. #AUSvIND

Is there a better acknowledgment?

Test match batting at its best by Pujara. @cheteshwar1 has been the difference between the 2 teams for me. To be able to bat for such long periods of time is a testament to his concentration and understanding of the game. #INDvAUS pic.twitter.com/7GJmJieOAk

Have to make sure people view it on a loop.

Saha currently making GIF of that dropped catch to upload that later on twitter.#INDvAUS

0 0 0 0
Previous : Watch: First batsman to hit five sixes in an over in ODIs
Next : Australia vs India: Numbers from Day 2 at the Sydney Cricket Ground