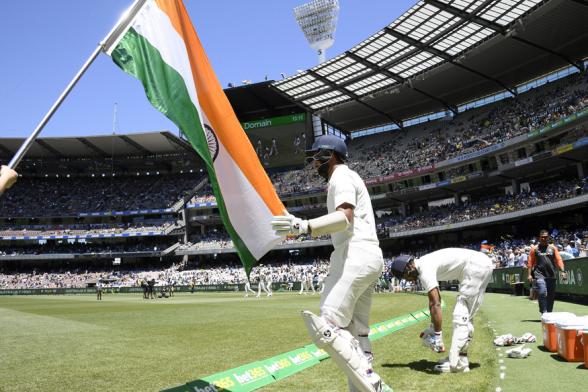 Can we sneak in another Test at Perth?

Shaun Pollock passes on the mantle with grace.

Steve O’Keefe won’t have too many fans now.

It might just be me, but it's pretty uncool to ridicule the FC comp of another country while using dubious stereotypes for a cheap laugh…

Cricket might be the only elitist sport that dilutes the structuralist society.

Ring fields, balls coming to the keeper on the bounce, extreme pace coming through at knee height, spin introduced early, pre-emptive selection of medium pacers, scoring at 2.5 an over, strangers indiscriminately yelling howzat from the outer. Boxing Day is fourth grade.

Steyn has a strong case to be considered the greatest fast bowler ever. No bowler in the history of the game with more than 250 wickets has a lower strike rate than his 42 balls per wicket & he has succeeded all round the world in an era largely dominated by batsmen. #SAvPAK pic.twitter.com/8Uy0bv2nl8

To their credit, India did have a very good opening day.

Have to admire Shastri's surprise selection policy. Giving Australia no beards or tattoos to target has completely flummoxed them.

Seems odd how the Australian bowlers seem to have forgotten the art of reverse swing all of a sudden. Would be handy today

Vihari is one of those batsmen who you hardly notice and then you look up and he is 5.#AUSvIND

Davis is touted to take over from the banned David Warner.

Get that DAVIS Warner in for Sydney Test 👍🏻😂 @davidwarner31 pic.twitter.com/JRCNKEUwCx

0 0 0 0
Previous : Most Test wickets by a Bowler in a Calendar Year
Next : Fewest balls by a bowler in Tests to take five wickets