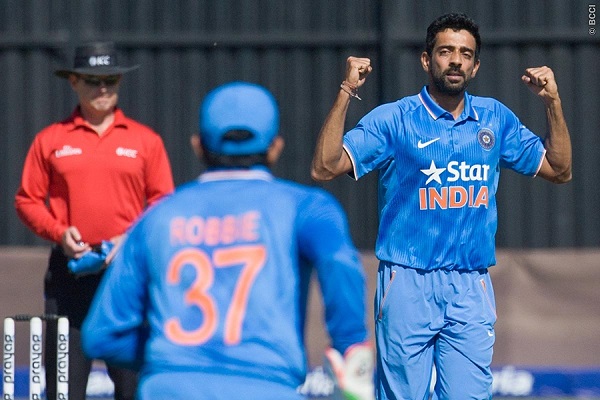 The Indian cricket team will be looking to assert their supremacy in the ODI series against Zimbabwe by completing a whitewash. With already two-up in the series, India will surely look to test some of the other players in the dressing room.

With Sanju Samson joining the team in place of injured Ambati Rayudu, the likes of Manish Pandey and a few others can hope to get a chance this time. This match, after all, is inconsequential for India. It’s a dead rubber.

But it’s an opportunity to someone like Murali Vijay to show consistency. The Chennai based batsman was amongst the top performers for India in the second ODI on Sunday at the Harare Sports Club.

He took some time to settle down initially, but really came into his elements once he was set at the crease. A few of his straight hits to the fence was a treat to watch, as the ball sailed through the air. It was an effortless innings.

Even make shift skipper Ajinkya Rahane understood is role well and batted with responsibility. He didn’t allow the disciplined Zimbabwe to rule the roost. It was a disciplined effort from the openers, which India immensely.

On Tuesday, the Indian openers will have to repeat their show in order to stay ahead of the Zimbabwe. The Indian bowlers too will look to continue with their good work like they did in the last two games.

All eyes will be on Bhuvneshwar Kumar once again, who has emerged as the best bowler in the team. Drcricket7 was first to report that the Uttar Pradesh pacer is back in his element and can be amongst wickets. Bhuvi, as he is affectionately called, will also be hoping to finish the ODI series on a high.

In the last ODI, all the top five Indian bowlers got wickets. Starting from dependable Dhawal Kulkarni, an improving Harbhajan Singh, a useful Stuart Binny to a young Axar Patel – all of them have looked good.

It will be interesting to see how the Indian bowlers tackle the next game. As it appears, India haven’t forgotten their scratchy four-run win over Zimbabwe in the opening match of the series. At least, their last match performance, where they beat the hosts by a comprehensive margin (62 runs) suggests that these boys are hungry!